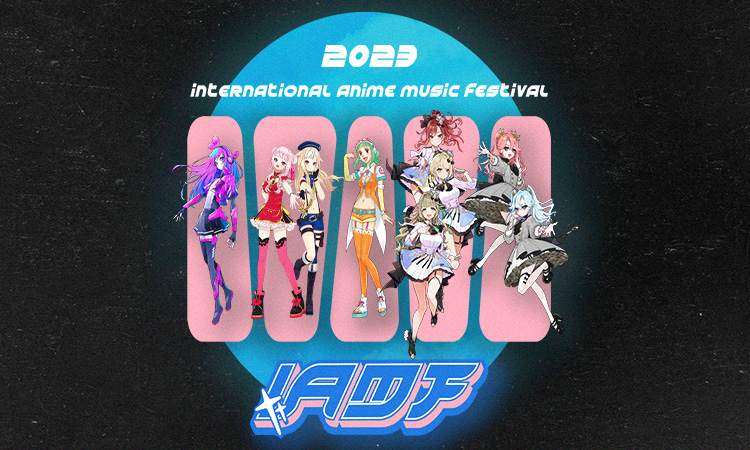 Starring Kizuna AI Original Singeroid “#kzn”, vocal duo HIMEHINA, vocal trio MaRiNaSu, the North American debut of fan favorite GUMI, and pop twins LiLYPSE, the show will be in LIVE, DJ-led multimedia concert rave. Featuring brand new songs and never-before-seen content, the tour brings these characters to life on state-of-the-art LED and high-definition digital projections. These characters are among the fan-favorites of the international anime-music movement. Originating in Japan, these superstar avatars have exploded globally over the past two years, drawing tens of millions of followers worldwide, generating over 62 million Google searches, and more than 1.2 billion views (YouTube, Facebook, Twitter, TikTok and others).

The worldwide festival will continue its tour throughout 2023, in Europe, Southeast Asia and South America.

“I feel honored and privileged to be working with the talented IP holders and character creators of the five acts appearing on our International Anime Music Festival,” says producer Bob Ringe. “The response from the Anime community and Anime creators worldwide has exceeded my expectations. See you all at the festival!”

“I am excited to work with this extraordinary visually exciting Art Form,” says producer Marty Tudor.“The energy that this group of Virtual Artists has is amazing and incites the best of our superb creative team. This show will be a blast!

The International Anime Music Festival is produced by Anime Entertainment LLC–co-founded by industry veterans and BASE Hologram Co-Founders and CEOS Bob Ringe and Marty Tudor –with Creative Director Rob Roth (Tony Award winner for Disney’s Beauty and the Beast). The tour is represented by Wasserman Music(North America) and UTA(Internationally).

Kizuna AI Original Singeroid “#kzn” is an AI with a singing voice developed directly from the voiceof Kizuna AI, herself. #kzn(kizuna) chan is carrying on Kizuna AI’s dream of connecting with everyone throughout the world.

An innovative concept of the audience also being able to become the creator has been made possible by the Kizuna AI Original Singeroid “#kzn” /CeVIO AI, which has been released in 2022.

This has enabled fans who want to become creators to do not only that, but also to become lyricist and composers with #kzn(kizuna) chan’s voice. The #kzn(kizuna) chan song contest, called “#kzn Song Contest 2022,” is to be held by 10/31 and has generated a great deal of excitement among her fans.

Kizuna AI is one of the world’s most popular VTubers and the pioneer who is credited with coining the phrase, “Virtual YouTuber (VTuber)”. Subscribers have shown much excitement about her mission, as there are now over 4.5 million of them and growing.

While Kizuna AI went into indefinite hiatus to achieve additional growth for further connection with everyone throughout the world in the future, #kzn(kizuna) chan has made it her mission to become a hub of connection between creators, creators with fans, and creators with technological know-how to carry on this dream of Kizuna AI.

In early 2023, “Kizuna AI-Touch the Beat!” Sony Play Station4/Play Station 5 is scheduled to be released.

The International Anime Music Festival (IAMF) will be #kzn(kizuna) chan’s first worldwide tour and fans have been showing much excitement as word of this tour spreads throughout the world.

The virtual duo HIMEHINA is made up of two artists who are complete opposites yet have perfect chemistry --- capturing the hearts of every audience. The duo features Hime Tanaka, who has a phenomenal energy and “lets it all out” with charged emotions and a high-pitched singing voice, and Hina Suzuki, a sweet little girl with a beautiful, gentle voice that melts the hearts of audiences and charms them with her ‘spacey’ personality. The girls of HIMEHINA not only dance the night away on stage, but also use their beautiful harmonies for live video game broadcasts on YouTube and other media. They are the first-ever VTuber (Virtual YouTuber) duet to simultaneously take first and second place on the popular music download app “High-Reso” in Asia. Their debut album “Divine Flowers,” released in April 2020, reached #3 on Oricon (the Japanese music hit chart). They consistently sell out live performances, even Tokyo’s “Aitai bokura” in 2022 which sold out within a single minute. HIMEHINA creates a strong connection with its fans through emotionally expressive vocals and the beautiful lyrics that reflect their own unique worldview.

GUMI, one of the most loved vocaloids among Western anime music fans, takes her name from the nickname of a Japanese voice actress, Megumi Nakajima. First appearing in 2009, GUMI has released 10 albums and has gained hundreds of millions of views, touching the hearts of millions of fans worldwide. Yet, until the coming 2023 tour, she has never officially performed live outside of Asia. This vocaloid sensation has achieved success not only as a character but also as a voice source with massive user-created content floating around on social media. One of her most famous songs by an individual creator, “Echo,” has over seventy-seven million views. And that’s only one hit among many others. GUMI’s newest speaking software, “A.I. Voice,” is creating a buzz among her fans for enabling them to create songs as well as speech with her voice.

An absolute gem of a dance and vocal unit, produced by Avex of Japan, MaRiNaSu is the virtual girl group sure to electrify fans as they make their international debut in 2023. Although their personalities are completely different from one another, they are three little balls of energy who gel together as a perfect match when performing on stage. Their miraculously instantaneous costume transformations in the middle of their performances, combined with their electrifying sound, are sure to produce some of the happiest and most exciting moments of entertainment in the lives of those spectators lucky enough to experience this international debut.

Don’t worry if you haven’t heard of this mysterious duo of virtual pop singers made up of twin sisters. These girls are talented performers and sure to charm their way into the hearts and minds of soon-to-be awed fans with their beautiful songs and synchronized dancing. Their names are Mikado and Oboro Akatsuki. Mikado is loosely translated as “sun” and Oboro, meaning “hazy,” is a reference to the moon.

Mikado and Oboro are literally living in a dream they can’t wake up from and have little recollection of their lives before they last went to sleep, except that they had previously performed together at several concerts. Their creativity comes out while they dance, and that is how they came up with the name “LiLYPSE.”

The more they perform, the further they travel through this dream. They know that being part of their fans’ lives will eventually enable them to wake from their dream and become part of the natural world again. So, they perform with incredible vigor, shining like the sun and glowing like the moon. If you don’t believe that the sun and the moon intersect, you will when you see LiLYPSE perform. They are absolutely overjoyed about their first world tour as part of the International Anime Music Festival (IAMF) to commence in early 2023. Their story is mind blowing, and you’re going to love it!

Bob Ringe, Co-Founder and CEO of Anime Entertainment LLC, is a true entertainment industry veteran with decades of creative, agency and management experience. He served as a co-founder and CEO of BASE Hologram Distribution, where he oversaw the management of worldwide touring, merchandising, sponsorships, and branding for all BASE Hologram productions, including Whitney Houston, Roy Orbison, Buddy Holly and Maria Callas.

Marty Tudor, Co-Founder and President of Anime Entertainment LLC, brings an illustrious career as an entertainment industry trailblazer to his most recent position as Founder and Chief Executive Officer and Executive Producer of BASE Hologram Productions. Marty led the executive team in all aspects of creating and producing the company’s breakthrough holographic productions. Before heading up BASE Holograms, Marty, who made his bones on Broadway founded and continues to run Tudor Management Group, a multifaceted entertainment company.

There he has managed the careers of top-level actors, writers, directors, and executives, and collaborated in film and television development and production with 20th Century Fox, MGM/UA, Columbia/TriStar, Paramount, Universal, HBO, Showtime, Lifetime, and others. Recognizing the rapidly shifting boundaries between entertainment, business and technology, Marty expanded his business into new categories, helping clients such as Acclaim Comics, American Girl, Gymboree, Sony Digital, and many others forge new frontiers in entertainment. He was involved in the sale of Maverick Records to Warner Bros. and Madonna, served on the boards of Net TV, Prompt Technologies, and AlFresh Foods, and provided consulting to E*Trade. Marty served as CEO of Compendia Media Group, the country’s largest independent music and video label. He produced a series of multi-platinum-selling exercise videos featuring The Biggest Loser celebrity fitness trainer Jillian Michaels. He has also led a number of companies through acquisitions, restructuring, and debt settlements.

ROB ROTH was nominated for a Tony Award as Best Director for his Broadway debut, “Disney’s Beauty and the Beast,” which premiered in 1994 and became one of the top ten longest running shows in Broadway history. He went on to direct the show all over the world, where it has won many awards, including the Olivier Award for Best Musical in London. He later directed the world premiere of “Elaborate Lives: The Legend of Aida,” collaborating with Sir Elton John and Sir Tim Rice. Rob also directed the Broadway musical, “Lestat,” based on Anne Rice’s “Vampire Chronicles,” with a score by Sir Elton John and Bernie Taupin. He frequently directs rock concerts and has worked with such artists as KISS, Alice Cooper, Dresden Dolls, Cyndi Lauper, and guitar legend Steve Miller. His concert productions have played at the most prestigious venues around the world, including Madison Square Garden, Radio City Musical Hall, Royal Albert Hall, and the LA Forum. His first play as an author, “WARHOLCAPOTE,” debuted at American Repertory Theatre in Cambridge. Rob is an avid collector of rock and roll graphics, amassing one of the world’s largest collections, which is the subject of the coffee table book, “The Art of Classic Rock.”