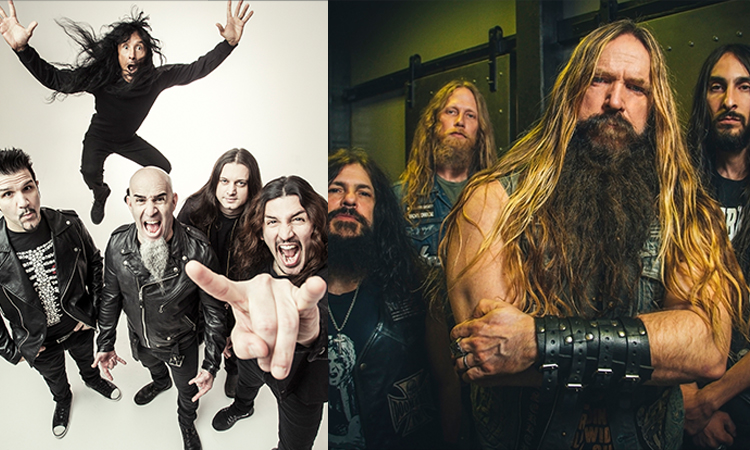 ANTHRAX
July 18, 2021 marked Anthrax's 40th anniversary, during which time the band released 11 studio albums, was awarded multiple Gold and Platinum certifications, received six GRAMMY nominations, and a host of other accolades from the media, the music industry, and fans.  In 1991, the band helped break down race and genre barriers when they collaborated with Public Enemy on the track "Bring The Noise," and was the first metal band to have its music heard on Mars when NASA played "Got The Time" to wake up the Mars Rover in 2012.  Along with Metallica, Slayer, and Megadeth, Anthrax is a card-carrying member of The Big Four, the four bands that defined the speed/thrash/metal genre. Anthrax has also introduced a series of now sold-out signature whiskeys and bourbons and partnered with the Stockholm-based NEZUMI Studios for a high-end, limited-edition Baleine dive watch. Twenty-twenty-one also saw the release of Z2 Comics' "Among the Living" graphic novel with a track-by-track storyline inspired by Anthrax's iconic 1987 album, Among The Living.  The book pulls together a "who's who" of names from the worlds of comics and music who created "bubble dialogue" and original artwork to express what the songs meant to them. Taking advantage of COVID-19's prohibition of concert touring, the band has been hard at work writing the next Anthrax album.

For Anthrax, 2022 is already off to a great start, but their 40th anniversary isn't quite in the band's rear-view mirror.  Unable to launch a planned 40th anniversary world tour due to COVID, the band will launch that World Tour this year.  The celebrations start July 26 in North America, co-headlining with Black Label Society, then a headline trek in the UK and Europe in the fall.

BLACK LABEL SOCIETY
Everything about Black Label Society begins with the riff.

A dedicated disciple of Zeppelin, Sabbath, and Deep Purple, Zakk Wylde looks to the massive guitar hooks in classics like “Whole Lotta Love,” “Into the Void,” and “Smoke On the Water” as guiding lights. “The main ingredient in any Black Label soup is the riff,” says the larger-than-life frontman.

Black Label Society builds their music on this simple truth, truth as self-evident on Back in Black as on the dozen songs comprising Doom Crew Inc., the eleventh album from the dependable stalwarts. Doom Crew Inc. is both a tribute to the band’s “first to bleed, last to leave” road crew and a salute to the legion whose support, stretching back to 1998, rivals that of the KISS Army. The Black Label Society biker-style battle vest “kutte” is as ubiquitous at hard rock and metal shows as a black t-shirt.

A charismatic heavy metal marauder recognized worldwide as a living legend, Wylde rose to prominence when Ozzy Osbourne chose him as his loyal axe-man, based on a cassette he mailed in as a teen. Guitar World put him on their cover more than a dozen times in recognition of his work on multiplatinum albums by the icon he calls “the Boss” and the two decades of music made by BLS.

The beautiful simplicity of BLS bangers owe everything to the lessons Wylde first heard on We Sold Our Soul for Rock N’ Roll. “Less is more with everything,” he says. “Except the guitar solos.”