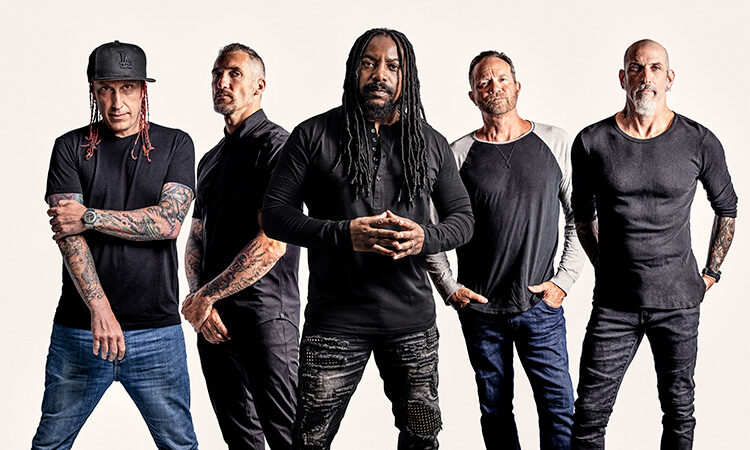 Atlanta-based quintet Sevendust are one of the most prominent nu-metal acts, rising above their contemporaries with an aggressive blend of bottom-heavy riffs and soulful, accessible melodies delivered by vocalist Lajon Witherspoon. Over the years, the band balanced the raw energy and brutality of early albums like 1997's Sevendust and 1999's Home with increasingly atmospheric production and even late-era acoustic sets on releases like Time Travelers & Bonfires (2014) and Kill the Flaw (2015), home to the Grammy-nominated single "Thank You."

The band -- comprising frontman Witherspoon, John Connolly (guitar), Clint Lowery (guitar), Vince Hornsby (bass), and Morgan Rose (drums) -- first appeared in 1995 as Crawlspace, releasing the single "My Ruin" on the Mortal Kombat: More Kombat soundtrack. Shortly thereafter, the group changed their name to Sevendust and released a 1997 self-titled debut, home to the breakthrough singles "Black" and "Bitch." Two years later, they issued the gold-selling sophomore set Home (TVT), which featured their mainstream rock hit "Denial." As the band's audience grew, they played over 800 shows alongside such groups as Korn, Godsmack, Disturbed, and Metallica, even making an appearance at Woodstock '99. Their angst-ridden third album, the aptly titled Animosity, appeared in fall 2001 and landed in the Top 30 on the Billboard 200. Seasons followed in 2003, their highest-charting album to date and last with TVT.

In late December 2004, word surfaced that Lowery had left the band, and those rumors proved true the following February when Sevendust announced ex-Snot guitarist Sonny Mayo as Lowery's replacement. (Lowery, a co-founder of Sevendust, eventually surfaced in the hard rock supergroup Dark New Day.) Sevendust's fifth album and first self-produced effort, Next, appeared in October 2005 on Winedark Records. The record failed to sell as much as its predecessors, and Sevendust later signed to Asylum Records, issuing Alpha in March 2007. Alpha fared better than Next, climbing to number 14 on the Billboard charts and paving the way for the band's seventh effort. Chapter VII: Hope and Sorrow arrived a year later and featured appearances by Chris Daughtry, Myles Kennedy, and Mark Tremonti.

At this time, the band parted ways with Mayo, welcoming Lowery back to Sevendust and restoring their original lineup. The reunited crew followed with Cold Day Memory in 2010. Landing just outside the Top Ten, it was their highest-charting set to date, yielding the trio of mainstream rock hits "Unraveling," "Forever," and "Last Breath." Their ninth album, Black Out the Sun, arrived in 2013, topping the hard rock chart.

Looking to change things up, Sevendust stripped away their metal edge for their next effort, issuing an album of acoustic tracks. Time Travelers & Bonfires, released in the spring of 2014, debuted at number 18 on the Billboard 200. Bouncing back to basics a year later, the group returned with the heavy yet atmospheric Kill the Flaw, which included the Grammy-nominated single "Thank You." After touring, they returned to the studio to record their 12th album. Produced by Michael Baskette (Stone Temple Pilots, Incubus), All I See Is War arrived in May 2018 on Rise Records. Two years later, the band returned with Blood & Stone, which included an emotionally charged cover of Soundgarden's "The Day I Tried to Live."