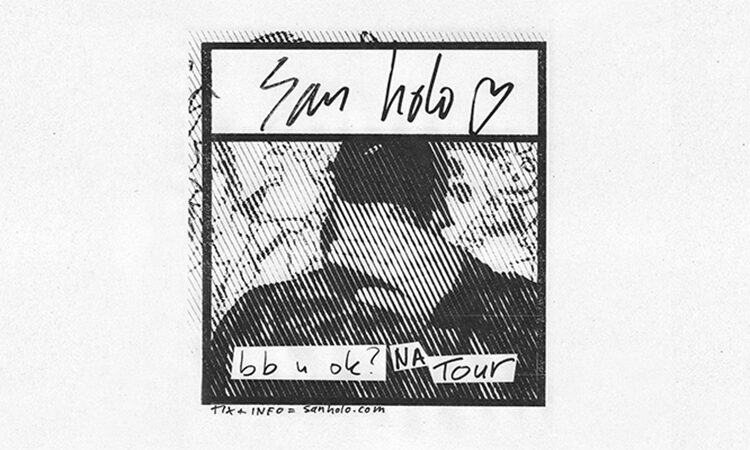 San Holo's new album, "bb u ok?" spans an impressive 20 tracks in which we see San carve his own trailblazing lane, crossing over into the indie alternative world with the use of analog instruments and collaborations with rock band American Football and Rivers Cuomo of Weezer. Recently released singles  ‘you’ve changed, i’ve changed ft. Chet Porter’,  ‘IT HURTS’ and ‘find your way (feat. Bipolar Sunshine)’, all lifted from the album received impressive results with press coverage from Dancing Astronaut, This Song Is Sick and Billboard to name a few. Title track ‘bb u ok?’ reached #32 on the Billboard Hot Dance/Electronic Songs Chart with ‘IT HURTS’, also reaching #41.

“bb u ok?”  follows on from Sanders' previous album “album1” which garnered amazing support across the board, resulting in San being awarded the International Dance Music Award for Breakthrough Artist of the Year and the Edison Pop Award (Dutch equivalent of the GRAMMYs) for Best Dance Album. His 2019 “album1” world tour included 75 shows and sold over 100,000 tickets across North America, Europe, Asia, New Zealand & Australia, including performances at Red Rocks Amphitheatre, New York’s Terminal 5, and The Shrine Expo Hall in Los Angeles. During 2020 San has performed for various virtual sets including Porter Robinson’s Secret Sky Festival.

BIOGRAPHY
For San Holo, everything is personal. Every note is a story and each lyric a memory, a hyper-real exploration of purpose, emotion and shared experience. The Dutch producer lives in his own space, crafting a world of beauty and sentiment between the build-and-drop bombast of Post-EDM and the intimate musings of ambient post-rock.

Coming up as a future bass producer in the Soundcloud era, San’s unique style and honest approach to songwriting has earned him a loyal following that supported his independent debut album, cementing the artist as a star in a league all his own, while earning the praise of critics and peers from rock icons like Rivers Cuomo to producers such as Porter Robinson.

Whether playing a sold-out show at The Shrine, a massive crowd at Coachella or headlining at Red Rocks Amphitheater, every San Holo show feels like an intimate experience. His fans are fiercely loyal, singing along to each song, some of them tattoo’d with his lyrics, and many of them decorating their social handles with echoes of his “stay vibrant” philosophy.

“I don't care if I play for 300 people or 5,000, as long as the people there understand what I'm trying to do,” he says. “Every song of mine is a personal experience, feeling or moment in my life. It feels like a piece of myself and when people are touched by my music, it feels like they understand a little bit of me. In the end, we all just want to connect to each other. That’s what true success means to me.”

Born Sander van Dijck, his catalog reads like a diary. Falling in love with punk and alt-rock, he learned to play the guitar and make noise of his own. His teenage years were spent hopping from band to band, and he even studied guitar at Rotterdam’s Codarts University of the Arts. Ironically, this was also where he was first introduced to digital production software.

Fascinated by the freedom that creating electronic music offered, he realized he didn’t need a full band to bring his exact vision to life. Like many producers of his age, his success started with remixes, and in 2014, his bright-synth trap edits of Outkast, 50 Cent and Nelly, released in a series called “Don’t Touch The Classics,” caught the eye of bloggers and DJs. His rework of Dr. Dre’s “The Next Episode” exploded on Soundcloud, amassing more than 234 million views on YouTube to date.

Hidden in that track’s euphoric breakdown were the candy-colored beginnings of the San Holo sound. Tinker-toy keyboards, joyful claps and wistful nostalgia swirled into something even stronger on 2015 single “We Rise,” but it was the hopeful ache and dynamic ecstasy of 2016’s “Light” that solidified San as an international star. With more than 172 million Spotify streams, the hit was initially self-released on his newly-founded label bitbird, setting a successful foundation for signees Taska Black, DROELOE and others to build upon while taking San to festival stages around the world.

By 2017, San Holo was regarded as a bastion of the future bass movement. The only problem was, “future bass” as a genre had gone stale. Uninspired by formulaic structures and plastic-pop crossovers, he dug deep into his soul and bet on himself.

“I've gotten offers from major labels and I've tried to make a hit for the radio audience, but it doesn't come naturally,” he says. “I don't like pursuing that at all, and I just realized I got where I am by doing what I love, which is making songs based on my personal experiences that people can connect to.”

His 2018 debut LP album1 was a risky and compelling exploration of intersectional sounds. Blending clear electric guitar with trap 808s, indie-pop melodies with explosive bass drops and organic, analog recordings with electronic sheen, album1 shone a light on San’s artistic soul. He even found the courage to pen deeply-personal lyrics and lay down his own vocals, alongside thoughtful collaborations with Bipolar Sunshine, James Vincent McMorrow, and more.

San and his team held fast in their vision, choosing to self release on bitbird, funding the project from writing to recording and touring entirely in-house. The bet paid off as listeners around the world connected with San’s honest and earnest messaging. album1 debuted on the Billboard Dance/Electronics Album chart at No. 7 and topped the iTunes Electronic Charts in the US, Canada and other countries.

San brought the album to life with an electrifying world tour that mixed live production, vocals and guitar work, bringing the album’s ethereal organics to new heights. The year-long world tour hit 75 dates across Asia, New Zealand, Australia, Europe and North America, selling 100,000 tickets in NA alone. Fans sold out venues from Los Angeles to New York City, including The Shrine, Terminal 5, and the Fox Theatre. There were festival spots at Coachella, EDC, Lollapalooza and more, while the tour culminated in a headline show at Red Rocks Amphitheatre.

“I feel so naive that I was so insecure about that,” San says of mixing guitars with his electronic sound. “People like electronic sounds mixed with real instruments. People understand it. It was such a scary thing back then for me cause it was so different from my previous work, but now I feel like that indie-meets-EDM sonic has really become my thing.”

He bared his soul to the world, and fans responded in kind. It’s a relationship best encapsulated in San’s “stay vibrant” movement, a concept that asks for honesty with oneself and others, to check in with yourself and your friends about how you’re really doing in triumphant or trying times.

“When you ask someone, ‘are you okay?’ we're always expecting ‘yes, I'm good’ or ‘no,’” San says. “What if we can express that in a percentage? Like ‘I’m 70 percent okay.” That's so much more accurate than saying ‘I'm good, thank you.’ That's what ‘up-arrow percentage’ is; realistic optimism. EDM was dominated by positive vibes only, but that's not realistic. It's ups and downs, and stay vibrant is a new way to express that.”

Birthed during his headline performance at EDC Las Vegas, the up-arrow percentages has been adopted by fans and constantly updated in Twitter handles and social media bios. It’s a sign of San following and a lifestyle choice to be in touch with your inner world and feelings. It also translated to a collection of original tracks shared to DSPs called the “stay vibrant collection.”

By the end of 2019, San was ready to embark on a sophomore album. Once more, he booked an airbnb in Los Angeles, but this time, he came with a confidence in his lo-fi-maximalism and indie success.

If album1 was about making a home in the grand scheme of electronic music, bb u ok? is about living in it. Coming in at an astounding 20 tracks, it’s a message of pure creative confidence. Somehow even more honest and forthcoming, it explores existential questions of love, hope, loneliness and social expectations while building toward even more organic soundscapes and full-band compositions.

More than anything, bb u ok? is about connections - the connections between people and music, people and each other, people and themselves. There’s a softness and intimacy to the project, and that whispered closeness comes to life in the hand-written notes of the album’s design. It’s San’s love letter to his listeners, his friends and the moments of wonder.

Honing in on nostalgia as an inspiration, San and his collaborators recorded much of the album on vintage audio equipment. They sang into cell phones to create texture and left whatever passing cars, chirping birds, or barking dogs might have bled into each recording. It takes on more of a DIY skate-punk vibe, reminiscent of San’s high school days. It’s a little rough around the edges, each of those frays representative of a real moment and feeling.

“I cannot play those songs without thinking about that time, and the way I felt,” he says. “The way the airbnb looked, the late night writing sessions in the garden, the friends that came over, It's all very vivid for me.”

album1 pioneered a post-EDM sound, blurring the lines between festival anthems and lo-fi bedroom ballads. On bb u ok?, San further explores this intersection by mixing more analog instruments and equipment into his electronic sound. He fleshes out his band with collaborations, from album1 returnees Bipolar Sunshine and The Nicholas, to long-time heroes of San’s including Illinois indie rockers American Football and Weezer’s Rivers Cuomo.

It’s exciting and validating, further encouraging San on his journey to create a sound and genre all his own that bridges his influences of indie, post-rock and EDM while speaking to the bigger feeling that brings us all together.

“That's the big thing that moves me,” he says, “The ungraspable nature of things that are just so much bigger. When you have a connection with someone, a friend or maybe a partner, there's a connection and there’s a certain energy going back and forth between you and this other person. You don't know what it is, but you know, it's there, and I feel like trying to capture that feeling in words is just not going to do that feeling justice. I feel like maybe, sometimes, music does.”
Read More