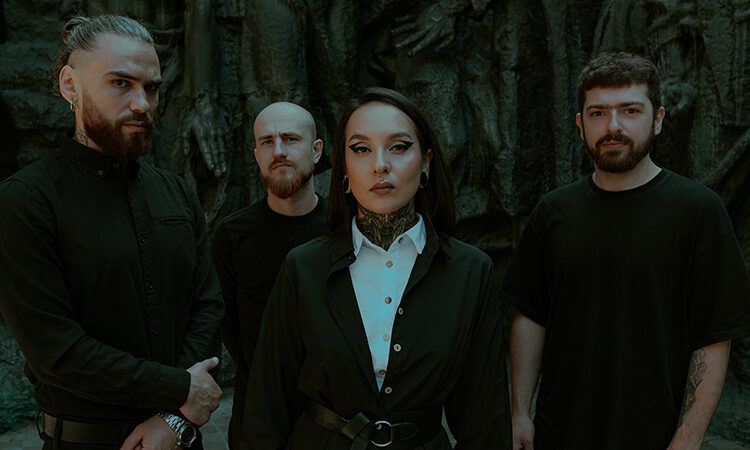 It is with great sadness that JINJER have been forced to cancel their upcoming US tour dates.
As the band and their families reside in Kyiv, their focus is on the safety of their families and their country.
We all hope for a quick and peaceful resolution.
All refunds will be processed automatically within 30 days of cancelation.
In light of these events and to do our part in supporting the overwhelming humanitarian effort that is underway in Ukraine, #TheFactorySTL is making a donation of $5,000 to the United Hatzalah.
Our gift towards United Hatzalah’s Ukraine emergency response will ensure that those trapped in the war zone and refugees fleeing the Ukraine will be treated by a team of professional, caring volunteers who are well-stocked with emergency medical equipment and prepared for any eventuality.
To make your own donation & to find out more, please visit https://bit.ly/chesedfundukraine

Through their relentless hard work, non-stop touring and critically acclaimed /chart-breaking releases gaining over 250M streams/views across all platforms globally – JINJER are truly one of modern metal's hottest and most exciting bands around today. The band has become synonymous with doing things their own way and breaking every rule in the Heavy Metal handbook- which they made loudly clear on their hugely successful fourth studio album: WALLFLOWERS.

In less than12 years, the four-piece Progressive Groove metal wrecking machine known as JINJER have carved their very own place in the Metal landscape. Hailing from Donetsk but now based in Kiev, this Ukrainian musical oddity formed in 2009 but consider the official start of the band with the addition of the incredible vocalist and Femme Fatale Tatiana Shmayluk in 2010. The band labored intensively and honed their sound in practice rooms and local stages relentlessly, culminating in their now cult debut album release INHALE, DO NOT BREATHE in 2012 and winning Best Ukrainian Metal Band in 2013. They would be awarded this prize again a few years later.

While most bands from a country not exactly known for it's Heavy Metal exports would be content to enjoy the recognition gained in those first few years, it was clear that JINJER craved more and were willing to go the distance to make this happen. It was this attitude and clear vision that saw the band quickly write and release their second album CLOUD FACTORY in 2014, and venture into the international touring market for the first time, booking their own shows and building their reputation face to face, fan to fan and more importantly under their own terms.

It was this intensity that caught the attention of Napalm Records, who quickly signed JINJER, leading to the release of their critically acclaimed third album KING OF EVERYTHING in 2016, as well as the game changing single video for PISCES, which gained the band new fans, millions of views/streams and countless reaction videos on Youtube. KING OF EVERYTHING showcased the musical prowess and growth of the entire band while opening the floodgates to a bigger International touring circuit which JINJER gladly took advantage of. By the end of nearly two years of non-stop touring in Europe, JINJER added new territories such as Israel, Philippines, United Arab Emirates, United Kingdom, America, Canada and most of Latin America, while sharing the stages and touring with the likes of Arch Enemy, Cradle Of Filth and DevilDriver.

Somewhere between touring vans, visa applications, and flights to new tour destinations, JINJER buried themselves in the rehearsal room to compose 5 brand new tracks for what would become the MICRO EP, written not only for the fans but for themselves, as they needed something new to keep their sanity on the road. Released in January 2019 and coinciding with their European Tour start together with Soilwork and Amorphis, the MICRO EP spawned the instant fan favorites APE and PERENNIAL, climbing to the top of many industry charts and radio station lists worldwide and once again showcased the musical growth and songwriting talent of the band, as well as Tatiana's amazing vocal range.

In October 2019 JINJER turned on the heat even more with the release of their third album MACRO. Once again written and recorded between non-stop touring, MACRO's sheer intensity and straight up technical brilliance propelled them to a whole new level in the metal scene, spawning eight videos including the huge hits JUDGEMENT (& PUNISHMENT), RETROSPECTION and HOME BACK, and once again raising the bar and gaining massive respect by fans, press and peers alike.

As JINJER finished out the year with their heads still rolling from the sold out Macro World Tours in North America and Europe, the band started 2020 off with high hopes with sold out performances in Tel Aviv, Australia and Latin America. Unfortunately due to the COVID-19 pandemic, they played their final show in Mexico at the Hell & Heaven Festival which not only ended their touring plans abruptly but was probably the last metal festival on the planet. Still, never ones to ever give up, JINJER rallied together and in September 2020, they played 6 shows in Europe becoming the very first international band to cross borders to perform live during the pandemic. In November 2020, JINJER released their very first live album and concert video ALIVE IN MELBOURNE, which was filmed one week before the lockdown hit, giving not only their fans but themselves some hope that better days were on the way.

In August 2021, to the surprise and delight of fans, JINJER released their most ambitious album to date: WALLFLOWERS, presenting a methodical and premeditated next step in the band's already imposing career, but moreover, mirroring the personal adversities they’ve faced during the worldwide events over the last few years. WALLFLOWERS is not only an upgrade to the progressive groove metal sound that all JINJER fans crave, but also a sonic pressure cooker of technical musicianship, emotional fury and an intense soundtrack befitting the harrowing state of the world today. From the blast beat laden banger COLOSSUS, to the 90s grunge vibe of DISCLOSURE! and dynamically blazing MEDIATOR, to the dark and gloomy psychedelic ride of WALLFLOWER and blistering urgency of tracks such as VORTEX and AS I BOIL ICE – the unbridled heaviness and personality proved to be another standout addition to JINJER’s already widely celebrated catalog, and a new standard for creativity in Modern Metal as a whole.

JINJER closed 2021 with over 70 concerts including many summer festivals, a short tour of mainland Europe and a hugely successful two month North American Tour, proving to the band and their fans that Metal music is here to stay ... and so are JINJER …