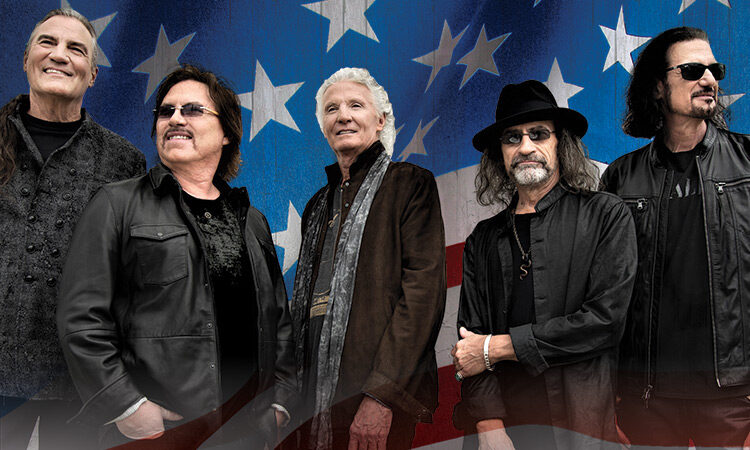 “You cannot talk about rock in the 1970s without talking about Grand Funk Railroad!”

Originating from Flint, Michigan in 1969, this top selling American rock group of the 70’s is “COMIN’ TO YOUR TOWN TO HELP YOU PARTY IT DOWN.” Grand Funk Railroad is extremely excited to be touring in 2022 marking a 53-year milestone. After playing to millions of fans on the band’s tours from 1996 to 2021, Grand Funk’s 2022 Tour will continue to reach both new and long-time fans.

Known as “The American Band,” the high-energy five-piece group will play forty shows all over the USA this year. Grand Funk Railroad includes original founding members Don Brewer (vocals and drums, writer and singer of the multi-million selling hit, We’re an American Band) and bassist Mel Schacher, “The God of Thunder.” Joining Don and Mel are true “All Stars.” Singer Max Carl is a rock veteran from 38 Special. Max penned and sang 38’s highest-charting hit Second Chance and was co-founder of California’s legendary Jack Mack and the Heart Attack. Don refers to Max as “the best blue-eyed soul singer on the planet.” Lead guitarist Bruce Kulick is best known for his 12 years with KISS and also has credits with Michael Bolton, Meatloaf and Billy Squier. (KISS members Gene Simmons and Paul Stanley were influenced early on by Grand Funk.) Keyboardist Tim Cashion has a master’s degree in music from the University of Miami. Affectionately called “Dr. Tim,” his credits include stints with Bob Seger and the Silver Bullet Band and English soul man Robert Palmer.

Grand Funk laid the groundwork for such bands as Foreigner, Journey, Van Halen and Bon Jovi with its signature hard driving sound, soulful vocals, muscular instrumentation and forceful pop melodies. The fact that Grand Funk’s legacy still reigns over the Classic Rock landscape fifty years after its 1969 birth in Flint, Michigan is a testament to the group’s influence and staying power. Mega-hits We’re an American Band, I’m Your Captain/Closer to Home, Locomotion, and Some Kind of Wonderful still receive continuous airplay on Classic Rock radio. We’re an American Band has received notoriety in recent years being used in movie soundtracks and in television/radio advertising. The huge hit was featured in a General Motors national TV ad campaign and in Disney’s animated feature film The Country Bears. We’re an American Band was featured in the Cuba Gooding Jr. film RADIO, and also in the swashbuckler SAHARA starring Matthew McConaughey.

Internationally acclaimed Grand Funk has toured the world, selling out in the U.S., Canada, Europe, Japan and South America. A 1971 performance at New York’s Shea Stadium sold out faster than the Beatles. The group’s widespread appeal is also evident in its prestigious recording achievements. Over their career, Grand Funk has had 19 charted singles, 8 Top 40 hits and two Number One singles (We’re an American Band and Locomotion, both selling more than one million each). The group has now accumulated 13 gold and 10 platinum records with record sales in excess of 25 million copies sold worldwide. The most recent gold CD award was presented to the band for their greatest hits package Grand Funk Railroad the Collectors Series.

The multi-talented band carries on the tradition of Grand Funk hits and creates a new chapter in the legacy of Grand Funk Railroad. GFR drew 25,000 people to their Molson Canal Series Concert outside Buffalo 20,000 in Albany, New York, and 20,000 fans to downtown Orlando, Florida. EMI/Capitol (Universal Music) released a new Grand Funk Greatest Hits package that includes a bonus DVD of rare concert footage. Seasoned Grand Funk lovers and contemporary rock fans discovering the group for the first time will be able to celebrate on the road in 2022 with GRAND FUNK RAILROAD!

Foghat celebrated their 50th anniversary in 2021, and their live performances show why the band is still around and why they will be able to keep on rockin’ as long as they want to play! Their music is timeless, and touring is part of their DNA. Foghat’s live show is as intense as ever with the incredible energy and musicianship that one would expect and hope for from a seasoned band with such a long musical history and they are bringing their fans along for the ride. These guys just love to play! Not content to rest on their laurels, the band released a great new studio album in June 2016 titled “Under the Influence”, and another 'live' album in June of 2017 called 'Live at the Belly Up'. They then followed it up with a double CD/DVD in 2021, 8 Days on the Road (recorded live at Daryl’s House Club in 2019!) All were given great reviews by press & fans alike. Foghat fans are everywhere and their audience consists of all ages. From the young who play Guitar Hero III and know all the lyrics to ‘Slow Ride’, to the Dazed & Confused generation of 30-40 somethings and the ‘boomers’ who bought Foghat’s first vinyl or 8 track! Looking out at the audience and seeing all generations rockin’ to Foghat is very gratifying to the band. “The band just wants to make sure that after every show, they are all convinced that they just got rocked, from the second we start the first song to the end of the show”. Formed in 1971 when Lonesome Dave Peverett & Roger Earl left the British blues-rock band, Savoy Brown, Foghat has earned eight Gold records, one Platinum record and one Double-Platinum record. And they continue to release new music every few years. They have never stopped touring and recording although there have been several ups and downs and changes over the years. They sadly lost Lonesome Dave Peverett in 2000 and Rod Price in 2005, but Roger Earl kept banging & kicking to keep Foghat’s musical legacy going. According to a recent review “The ’70s called...but there is no way in hell we are giving Foghat back to them. The iconic band from the past is rocking just as hard as they did decades ago, if not more! Foghat’s thunderous blend of blues, boogie and butt-kickin’ rock ‘n’ roll are shaking walls and fans everywhere. There is so much talent in this band it is ridiculous. Lead vocalist/lead guitarist Scott Holt played with Buddy Guy for over 10 years, and lead/slide guitarist Bryan Bassett played with Wild Cherry and Molly Hatchet." Bass player Craig Macgregor who had been with the band since the ’70s, unfortunately became ill in 2015 and was unable to play, and we sadly lost him in February of 2018. Craig had recommended the very talented & personable Rodney O'Quinn as a 'fill-in' who came to Foghat via the Pat Travers band where he proved he knew how to lay down a solid groove. O'Quinn viewed MacGregor as a mentor and is a great permanent addition to the band. And on drums, of course, is the man we must thank for keeping Foghat going...founding member Roger Earl, who's positive attitude and solid drumming style and pure joy of playing has been an inspiration to all.” If Foghat had only given us ‘Slow Ride’, the band’s place in rock history would be secure. But the band is so much more than that. As stated by Roger Earl, “we are still a ‘work in progress’, writing and recording and plan to be until the day we depart this earth”. The band has started work on yet another Blues/Rock Studio Album to be released in late 2022)! So, stay tuned, you cannot keep these boys down!